I woke yesterday morning a little sore from the limestone. This was probably due to doing a tour of the new problems upstairs at BUK set by Ian in the evening, as usual they were fully up to the high quality we are used to, and it was good to see Nao in there preparing for Birmingham also.
Ian had to set a circuit before we could go out climbing so i joined in and set a few easy problems about V1-V3 range. Setting over we thought we would go to see if Longridge was dry and to our amazement it is. First up a quick warm up on Big Marine now a high ball V7 after the ground was lowered by the farmer, a mega classic by the evergreen Mr Lovatt, the last move is the crux!! A year or so ago i tried the low start to this but it was a little too warm and later Ryan Pasquill nailed it at 8a and called it Sub Marine. Ian repeated it just after and thought 7c+ and after i repeated it yesterday i thought the same. 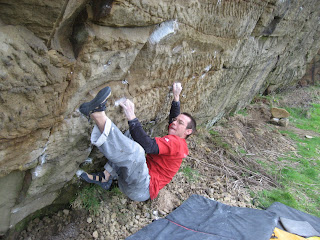 Then i started working the true sitter (above), after an eternity of not being able to pull on i finally got a sequence and got within a nats chuff of linking it, but didnt!! 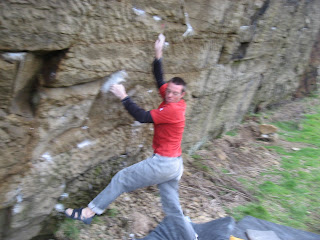 Oh well something to go back for.