Its been nearly two weeks since i blogged last and i have been pretty busy. After the core conditioning session it was off down to the Castle. As usual a warm welcome was found and a days route setting was followed by some coaching and then the Castles Christmas Party. Next up on the tuesday was a lecture at High Sports in Shrewsbury where i showed my Madagascar Lecture to about 130 pepople. Finally it was back to BUK for a couple of climbing sessions split by a Five Ten boot Demo. Friday brought the Works boulder comp Round 2 where i spent most of the evening trying the £50 problem only to fully break myself ahead of the Works 1st Birthday Party, a short stay as 1 i was knackered and 2 the next day i had the leading team trials......enough said about that the better.
Anyone else would have thought ahhhh Sunday a day of rest, but oh no not me. It was off to Preston to meet the Boulder Team to go running, this was following by some excellent workshops and then some circuit training. When i finally got home at 6pm i went straight to bed!!!
This week has been a bit tamer by comparison where most of my work has been just sorting random stuff and deal with office shit. Wed i finally managed to get out with Ian and we headed for Earl. It was cold but not really mint. I managed a clas 7c on my second go then tried a few other harder things and ended up falling from the last move of Slim Shady after which i couldnt get there again and it was starting to hurt my leg. 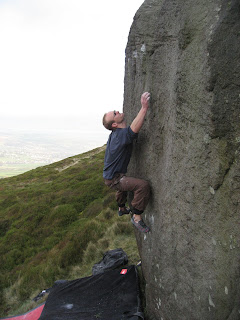 Ian on the wicked 7c at the right hand end of Earl Crag
On thursday my boat passed its Safety Certuficate (MOT) so at last i can get me license. Today it was the dentist and even 6hrs on my mouth is still numb and i can dribble out the right side without even trying.
At last only the weekend left and then i am off to Ticino for a week on the granite. Cresciano and Chironico to you.
Labels: Coaching Comps Earl Europe