An earlyish start to get some better conditions and we set off to The Jungle Sector to check out "The Relic". After some quality easier problems in the V2 to V4 range it was time to check out the main aim. A steep start off undercuts lead into obvious but steep moves then what looks like the crux slap allows access to the easy but very high slab above. A little chalk and a quick brush i quickly managed to flash it and abmled my way to the top. My topo said around V10 for this but i thought V8+ was about right. Some yanks here a while ago said V7 and V10 for M150 but both problems are pretty much the same in my book. Both world class though. 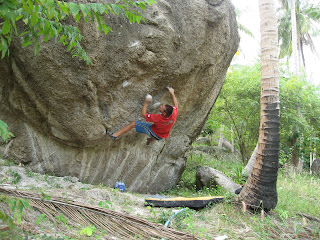 Next up was a problem marked project on the back of the huge Relic boulder. Obvious moves, a high step rockover and a nasty pebble pulling highball top out were the key to a first ascent which i named Coco Nuts V9 due to the land levelling we carried out with coconuts and palm tree branches! 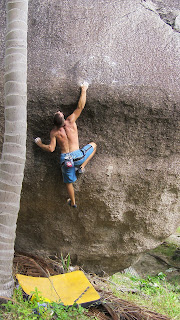 Finally this afternoon i got a tour of a newish sector The Secret Garden by sign man Rob. Wow!!! An early evening and an early start is required me thinks.
Labels: Bouldering Koh Tao Thailand