Good on the grit

Well arrived back after a long journey home. Absolutely goosed the obvious thing was to head to BUK for a quick session with Ben Meeks and Martin Smith. Being surprised with how strong i felt was brill but the way i felt after the session was not so good, massive tiredness and then a stomach bug meant the next day was spent in bed!!!
Monday the weather was amazing so its was off to Almscliffe two 7b+s Buffy Wants Daddy and Matts Roof and a soft 7c+ Magnum Opus Super Direct were sent and we started work on Ste Dunnings amazing highball 8a prow. Chiasmate is behind the Matterhorn boulder. After ages unlocking a sequence myself and Sooty were getting to the lip but trying the problem ground up meant a lot of effort was put into trying a high move the wrong way. Exhaustion set in and we all went away, motivated about climbing at Almscliffe for the first time in years.
After a rest day we were back, during the day it was a bit too hot as the bloc catches all the sun but as the sun set and the temperatures dropped i managed to grow the balls to slap for the jug to tick the 2nd ascent. As for the grade its hard to say, on the ground you would do it much faster as it is easier to work but up high it adds a certain spice and fun to the problem and i suppose 8a is fairly fitting to such a quality line, albeit a little soft. 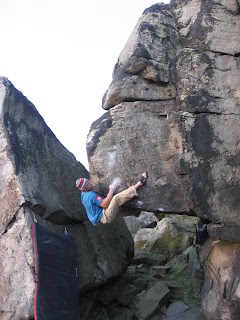