With the weather so good this week it would have been rude not to climb on the grit. Just to make a change i set my sites on a route i got close to a number of years ago, Reservoir Dogs. Since then it has lost a pebble off the crux and never been repeated in its current state. The challange to climb it became a mini race with Jordan Buys who was also trying it, after a few visits i managed to get the repeat with Jordan hot on my heals with an ascent the following day. This is one of the best aretes on gritstone and well worth the visit, a little bit harder than before but thankfully not impossible. Alastair Lee from Posing Productions was there to capture the action from both ascents. 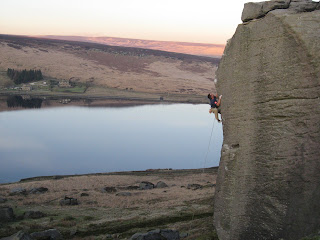 With the weather still good it was time to turn my attention indoors with team training on Sat and Sun. Two excellent and hard sessions at the Works and Boulder UK made me realise just how weak i am at the minute. I still managed to bust the odd move so with two months to the first world cup of 2008 i am fairly happy.
Labels: Bouldering BoulderUK Comps Grit