After resting on thursday i had a really nice day climbing classics with Catherine in the Llanberis Pass. First up was the ultra classic Cemetry Gates topped with the excellent bridging challange of The Grond. A quich descent and we headed over to the slate to climb the fantastic Last Tango In Paris and Comes The Dervish which felt tough in the full on sun and soft boots!! In the evening i had to do my bit for climbing publicity and was interviewed on Chris Evans's Drive Time on Radio 2. Click here and go to play again Friday to listen to it. Its at the end of the show.

Yesterday i was back up to Kilnsey to try my project that i bolted 2 years ago, after four days of effort i managed a first redpoint of the day ascent in cool but very, very windy conditions. The very bouldery route is essentially a direct start to the unpopular but now rebolted and with a belay Chris's Route. The line boulders out of the scoop to the left of Sub Culture where a powerfull clip off an ok hold leads you into the second crux which revolves around a very sharp two finger crimp. Dr Crimp weighs in at around 8b+ and features some excellent climbing. 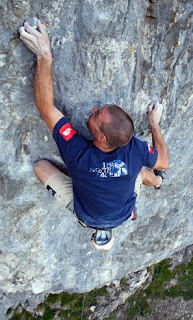 Finally getting the link on Dr Crimp meant that i could go to Blackpool today to defend my British Leading title. I didnt really hold out much hope as i hadnt done any routes on plastic for ages but obviously a few days of limestone stood me in good stead. I managed to qualify in 1st place and fell joint with Dave Barrans and Drew Haigh so on count back i won the title for the third year running. The womens title was taken by fellow bouldering team member Audrey Seguy. The routes were set by the all star team of Ian Vickers, Rob Lamey, Jamie Cassidy and Andy Long who also came up trumps by making some bespoke tufas, about 10 of them for the mens final!! A massive thanks to Blackpool Wall and all the volunteers who work really hard to make these events great fun.
Labels: British Championships Comps Kilnsey Wales