Whoa........ its been ages since I blogged. Well finally after Trango I have got back up to almost full fitness. When i returned from Pakistan i was the weakest i have been for at least 20 years!!! My max boulder grade was just about V6!! A weeks touring the walls soon got me back up to speed and at the Works Percy almost got the chance to kick my ass, but luckily he was spanked by his spotty slab and after a right tussle it was in the bag for me.


In Jan I have a couple of Lectures organised on Trango. On the 11th I will be at The Climbing Works with Heason Events and during the day I will running a Five-Ten boot demo. Lecture starts at 8.30pm. On the 14th i will be over the border in Blackburn Lancashire where we kick off at 7pm.

In the past few weeks I seem to have missed all the grit action!!! No great trauma really as i have been beavering away down in Swanage with Andy Long and Gav Symonds and doing a bit of route setting in London .

First up though was a weeks coaching for the Orange House and I also took a few days to climb for myself. I visited the Wild Side and climbed with the local wad August and also went to Forada where i did an excellent 8a+. 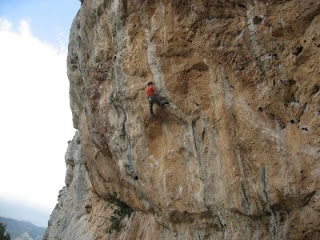 
Swanage must be one of the most underrated sport climbing venues in the UK. Steep and thuggy it lends itself to some fantastic fun sport climbing, and with the help of the BMC Bolt fund most routes are now reequiped with Stainless Steel Resin Bolts.

Highlights of my days out down there were Hells Darker Chambers 8a and Infinate Gravity 8a+. 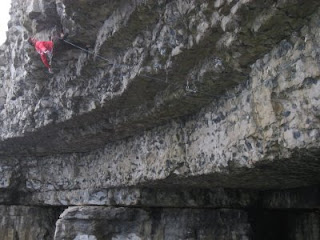 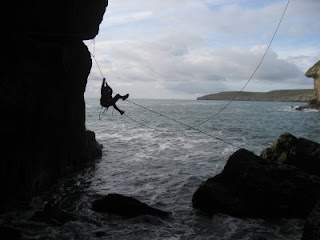 The best way in to Blackers Hole, and the start to Infinate Gravity 8a+.


Infinate Gravity is without doubt the best route at this grade in the UK and infact as good as any route of its style in France or Spain. I thought it was better than the Grande Grotte routes on Kalymnos. Here are the facts......40m long, 20 new stainless runners, 100+ moves, 45 degress overhanging. If that aint fun then I dont know what is.

Myself and Andy rebolted the route over two days and on the second I had a play on the bottom half (the bit with dry bolts). On day three with very tired arms Andy passed on some Beta and i tried it as a warm up. Knowing the bottom half was good, but the top half I was flashing. 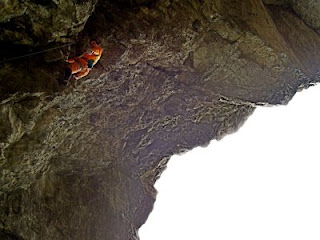 
After an almighty fight that involed every concievable move I found myself on the top rail, I battled along it screaming to clip the last bolt but my luck was up. Even trying to use my wrists and elbows didnt seen to help as I fell two moves from the belay!!! I hung on the rope limply for what felt an eternity.

Obviously I was a bit gutted but with routes like tis sometimes its great to drop it in such a place after a great battle as you get to have another go. After my sickness subsided I tied back in and did the deed for the 3rd ascent. I stood on the ledge and took in the sunset, gulping in three of the most satisfying and enjoyable days out on the crag ever. F**K the big Mnts and the Grit, Swanage in Nov in your t-shirt is where its at. 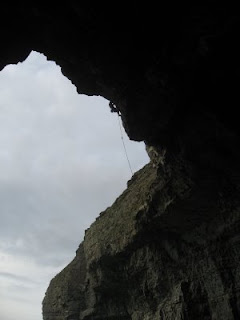 About halfway up Infinate Gravity


Just before I headed back up north I visited The new and soon to open Climbing Academy in Bristol. It looks like Paul and his team have done a great job. 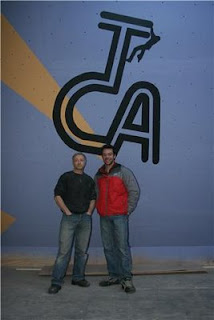 Paul and I under the CA logo. 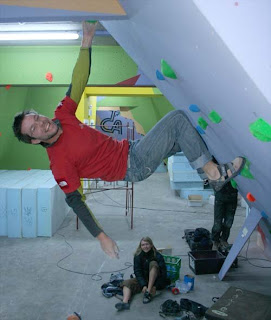 Enjoying an early tick on the 45 degree board.