Finally after a fairly traumatic drive to Alicante we have settled in to the Orange House. We left Briancon and after a short journey spent the night of the 26th on a farm in the Camargue. The next day we headed for Spain, all was going well until just before the border we had a flat tyre on the horse trailer, rather annoyingly we discovered our spare had a slow puncture!! After an hour or so the mechanic arrived and we set off to pump the spare up. In France on the 27th all the garages are shut so the spare holding air was the only option. Thankfully it did!! With the indicators flashing and our lights on for hours, when i got back to my van the battery had died and our useless mechanics battery pack was also dead. Panic......only until i remembered our leisure battery. Phew. 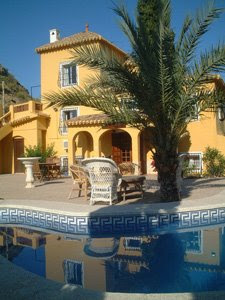 We arrived at the OH on the 29th and settled in to doing nothing for a few days. On the 1st Jan we took over the house and have already changed quite a few things. We have reinstated the bar, refitted the office, added a new kitchen and rearranged a few rooms. Next up will be some painting and a stable.

Apart from all the DIY i have been out on the crag. First off cleaning up a bouldery 8a at Echo. The i headed up to the Wild Side to get back on Espacio Tiempo 8c with the aim to get it before i returned to the UK on the 8th. On the 5th of Jan after a rest day i headed back, dogged up the route as a warm up and felt really strong, conditions were excellent. I got the route on my first go that day and second overall. Well pleased as its just the start to 2009 i wanted. Afterwards i managed to os two 8a+ though both i felt were more like 8a. A great day for me anyway and hopefully there will be more to come.
Labels: Spain