Well this years BBC was better than ever. A fantastic crowd made the final really special. Thanks to Graeme Alderson the event goes from strength to strength and hopefully next year will host not only the BBC but also a World Cup. The weekend was filmed for a sky documentary which should be ready for sept. 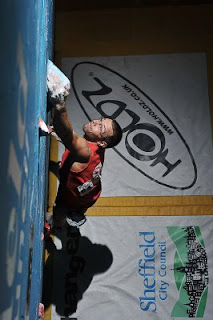 Big thanks to Matt Heason for building Cliffhanger to become a must not miss weekend and with the support from BMC and hold suppliers Holdz its only going to get better.

Having not bouldered seriously for a year now i wasnt really expecting much. Attending just for fun and team selection for next years World Cups i was just hoping for a final place. That achieved i managed a great start in the final and flashed the first three boulders. Lack of pure strength was more noticeable after that though and i failed on the last two. I was fuly made up though to get a podium place and its always good to remind them youngsters that next year they need to watch out. 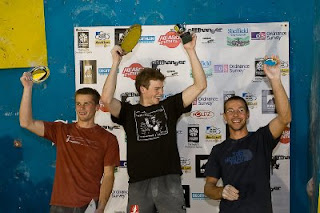 Great to see Ned and Dave looking so strong. Bring on 2010.

Gotta go now as its off to Ratho to get utterly pumped at the BLCC
Labels: Bouldering British Championships World Cup