I am sure now most of you have read, watched and followed our trip across Europe. If you haven’t seen the latest few posts then check out the Summit Series Road Trip Blog and the final instalments. Thankfully the trip is over but it will certainly be something i will never forget. 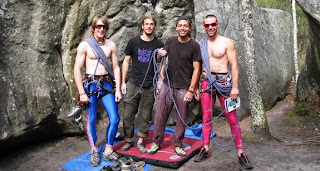 Some odd goings on in Font with James.

Some words from Unclesomebody. “The final stop of the roadtrip was also to the longest, with 3 days planned out at the climbing festival of Melloblocco. The 72 hours of planned relaxation and bouldering turned into 66 hours of manic editing, filming, and route climbing. The final 6 hours were spent partying away with the throngs of climbers from all over the world. In one small tent in a valley of Italy, 100’s of people from all over the world were gathered for the same thing, the love of climbing. This is why we continue to push ourselves, this is why we spend many dark days training, this is why we continue to explore the unknown and exciting potential that the world of rock climbing has to offer. We do it for nothing but love.
“the hardest 8a of the Trip”
50,000 words, 15,000 km, 47 days, 30 hours of video, 22 borders, 14 countries, a load of climbing, and a whole load of new friends later, the Summit Series Road Trip was a great success and a journey I feel privileged to have been involved with. James summed it up with “The SSRT was one of the best times of my life. It was harder work than I could ever have imagined but I feel this just made the many good times even sweeter”. Given the opportunity to undertake something like this again, the only question would be “When do we start?”.

If you fancy seeing some of the videos on the big screen then get yourselves down to the Cliffhanger event. Not only can you see me at 3.30 in the lecture tent but there are loads of other events happening and of course the Senior BBC will be held on Sunday. Check out the Cliffhanger for more details.

When the SSRT was over I went from one fantastic adventure to another. Hopping on plane from Milan to Alicante I went home to my new house. Kate had been there for a few weeks or so already. When i arrived it was straight to work on a horse shelter…..no climbing for Gaz this week. 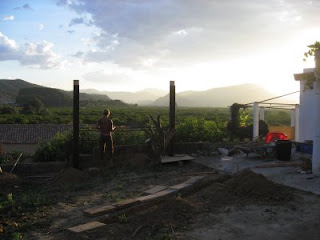 Mine or should i say Kate and Joes shelter is under construction. Joe being Kates horse.

A quick week back in the UK for setting at The Arch, The Castle and some coaching at Craggy Island meant another week with no real climbing. Returning to Spain I was determined to get at least a few routes in but this month really had to focus on jobs around the house and my land. A few nice days out and I managed 3 8a+ one of which was a first ascent, an 8a os in a new sector at Sella and another hard 8a rp at the hardest crag in Spain Murla. We had visit from Yann and Kates sister allowing us to be the tour guides and treat ourselves to some relaxing evenings on the beach. 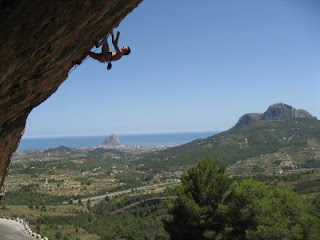