A long time ago I witnessed a ground breaking fast ascent of True North 8c. That day I had the pleasure of holding Ian Vickers ropes as he worked the route and redpointed it on his first attempt all within 2hrs. Even by today's standards this would be considered a fast ascent of an 8c. Since then the seed had been sowed that one day I would clip the chains having repeated True North. Finally that day arrived and on Tuesday I got the tick.
A few years ago I came close, failing on the last moves. A few days later I returned only to find the line wet. When the rain comes the North Buttress and in particular True North can get wet in minutes. I returned later in the season and after another day of work i went home hoping that on the next visit it would go. Again the rain put an end to that. Frustrated and annoyed at the British weather I vowed I would never come back but annoyingly the tug of such a fantastic line always remained.
Fast forward 3 years and i find myself with a few weeks to spare and a dry North Buttress. This time I was determined not to be beaten. I decided I would grind True North into submission.
My first few days back on the line were strange to say the least. Fairly unfit and a little weak I found the start (Full Tilt) nails. 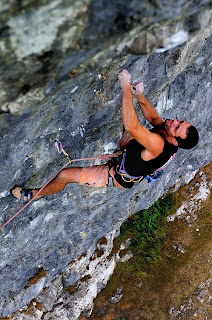 Hard crimp moves as I pass the belay on Full Tilt.

I spent ages fine tuning my sequence. The top section felt a lot easier than before though.....maybe the steep juggy climbing I had been doing in Spain was more in keeping with this section of the route.
On day 5 I had two good redpoints, on the first I fell a move from a large hold before the last clip. 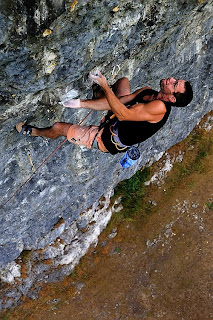 My first real redpoint this year i fell from this burly move. The next go I fell slapping the last hold.

The next day I returned confident it would go down quickly, three massive burns later and three falls from the last move, I knew the key to success would be a little more power.
A few rest days and a session at the British Bouldering Champions I returned with Keith Sharples. After warm up session consisting of doing the last moves about 10 times. Keith took over bely duty and Dave Sutcliffe, the maker of the Quest Bouldering DVD assumed his position high on the face with camera in hand.
The redpointed went pretty smooth really the only difference was that I actually felt tired on the lower 3/4 of the route, but when i arrived at the last move I focused on allowing my right arm to recover. It didn't really matter if my left was beasted as I wouldn't really need it again. Two more crimps a bit of a power scream and I found myself shaking out on the rail of Urgent Action.....and as they the rest is history. Not ground breaking like when Ian did it but to me it is one of the most significant climbs I have ever done. Thanks Ian for inspiring me to keep plugging way at this route, at last I can lay it to rest. 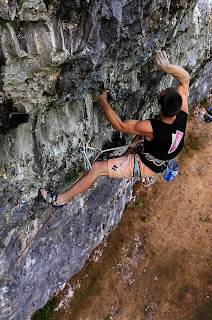 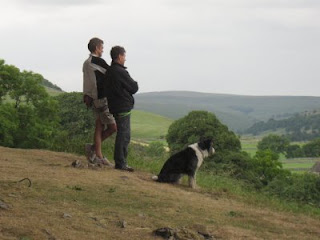 Watching the cows at Kilnsey. Mick Lovatt on the left who finally ticked his life long goal of Urgent Action after around 20 years of effort. Nice one Mick.
Labels: 8c limestone Yorkshire