Skip to main content
January 26, 2010
Having just read Dani Andradas blog it has inspired me to pull my finger out and get back to blogging...oh yeah and climbing. A quick thought about Dani though......what a fucking demon that man is, a total machine. Note to self "I must try harder and buy a drill".

As for what I have been up to since I blogged about True North I am not sure....it all seems to blur into one nowadays. The summer in spain brought an end to climbing hard routes there but I still tried to climb this amazing 8b+ in El Bovedon in between travelling back and forth to the UK for coaching, setting work and of course working on the house. Business at Epic Adventures is starting to pic up and in the next few weeks we will announce our course and holiday dates for 2010.

Conditions for climbing though were not on my side as a few of the holds on my chosen 8b+ were fairly friction dependant. As October arrived I managed to get a few FA's under my belt. Bloque 8b and Jog Pat 8a were both climbed on the same day at the short n hard Los Pinos. 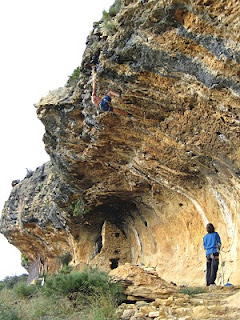 Jordan Buys made the second ascent of Bloque over Christmas and confirmed the grade and the quality of the Sharmaesque crux move. I also managed a new 8a+ at L'Ocaive and a new 8a+ link up in El Bovedon. With the onset of September I went to the UK for a two week work stint. I was psyched to train so that when I returned I could do my project. Annoyingly I forgot to bring any rock boots. After about two minutes of being pissed I started climbing in my trainers and two weeks later I was probably as strong as I had ever been. Back in Spain I went straight to Bov and climbed the route first go. A fantastic feeling.
Next up was a slow drive back to the UK. Two reason, one I was selling my van and two we were returning a pony back to the UK after its extended Spanish holiday. We stopped off at my field in Catalunya and paid a visit to the excellent Terradets, checked out Tres Ponts and headed into France. We spent a few days chilling out at John and Anne Arrans place Chez Arran in the Ariege and took the chance to go to the impressive Grotte De Sabart. After an almighty battle I managed to tick Dame De Sabart 8a once i found the correct method. Wow.....Stevie you are also my hero. I cant wait to return here and battle some more. 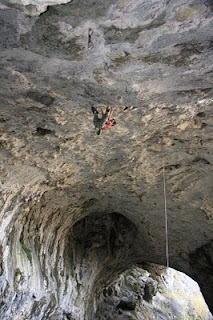 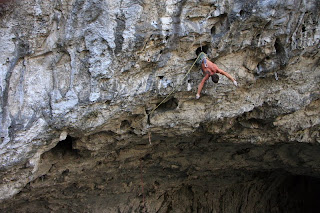 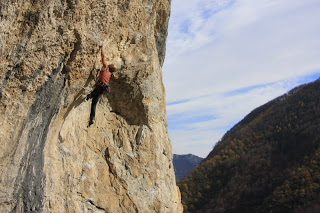 Kate attempting to flash a cool 7b+ at Genat