In the second of my catch up blogs I find myself back in the uk for some more setting work. As always I like to try and come up with some random problems rather than stick to the crimp, crimp, right, left, right that you get at so many walls. 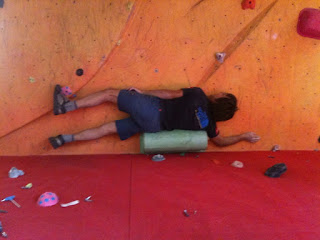 Dont lie down on the job. 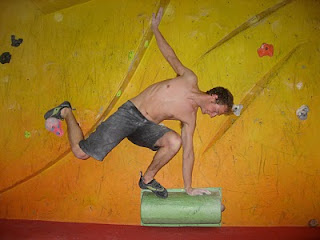 After a testing sesion we began to ponder what to do for the weekend and with the weather looking great it seemed there were two options. The Plywood Masters or Pembroke? Being a bit tired of the plastic we decided to rest on the Sat and drive over to Pembroke with one thing in mind The Big Issue. Ever since the first images of Dunne came out I wanted to go take a look.

I instantly opted to climb the route with all the gear in place. On the third ascent this was how Adrian Berry climbed it and on the First and Second there were a number of jammed wires that only quick draws we then needed for. 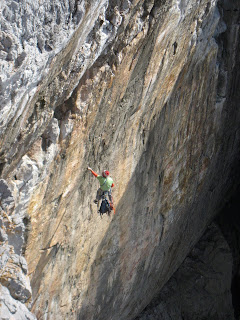 Placing the gear on Abseil

After about two hours of top roping and learning the moves i opted to go for a lead, infact the later I left it the more all the wet and damp pockets dried out. After having not climbed above a wire for ages this was an interesting experience, I shook and wobbled my way through the crux. Mike described my climbing style like that of a sack of potatoes and it felt like it, I was over gripping everything and finally got powered out near the end of the main wall. Down I came knowing I should of been able to do it. After a rest I had another go knowing it should be in the bag, but the day had taken its toll and I fell again even lower. Next day it would go.

Day two and we headed to the parking.....bollocks the flags were out!!! The crag was closed until 4pm. After a long and slightly frustrating wait we legged it back in and after a warm up top rope I climbed cleanly to the top of the best wall and hardest route at the time in Pembroke. 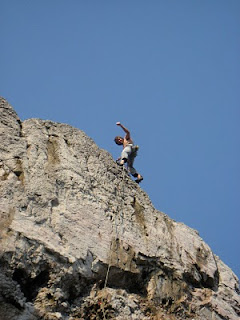