Just as I was ready to return to Spain along came the ash cloud and cancelled my flight. Kate was pretty annoyed with this as I was expected back in Spain to work on the house. As far as I was concerned I was going to make the most of my extended stay in the UK and headed to Andy Longs house in Portland. First up was a little bit of warm up deep water in fantastic sunshine. 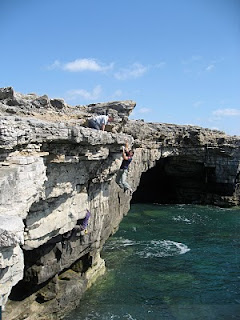 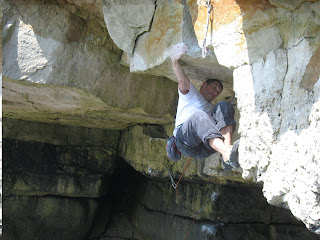 Andy on Once Were Warriors 7c

Followed by the hard Osaki Dolphin 7b+ and the excellent Air Hoodlum 7b+. 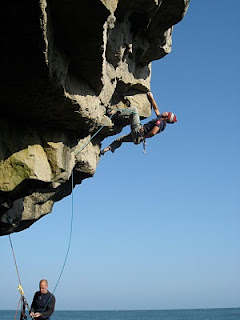 Enjoying the evening sun on Air Hoodlum 7b+, beware though as the first bolt is missing.

Next up was Cheddar where we warmed up on Follow The Slick Red Road To Gadansk 7c, then climbed Licking Tarmac 7c and just for fun I linked the boulder traverse in to a Licking Tarmac at around 8a.

Finally I finished off with a real tussle to OS Harder They Fall 7c on the imposing Lion Rock, a route i have wanted to repeat since the Remnant years. The next day we headed up to Sunset Buttress to climb Paradise Lost 7b+ and Edge of Eternity, cool climbing in a spectacular situation.

The next day we headed to Swanage and the amazing Palace Of The Brine 8a+. A warm up flash attempt left me pumped, I got close to getting through the crux but I am sure I would have still fallen after. With a bit of work to unlock the tricks I managed a 1st RP ascent using a variety of knee bars, hand/fist jams, footlocks, powerful undercuts and screams to get to the belay for the 3rd ascent.

My final day on the South Coast had arrived and we headed back to Cheddar. I warmed up on Jaz Defector 7c+ which is Crockers original version of Licking Tarmac and essentially the same route. The main event of the day though was the excellent Shadow Walker 8a+. This funky 8a+ on Lion Rock has a powerful and pumpy start to a good rest followed by a nice technial crux. Well worth the effort and a Cheddar classic with a tasty last bolt.
Labels: 8a 8a+ cheddar limestone portland