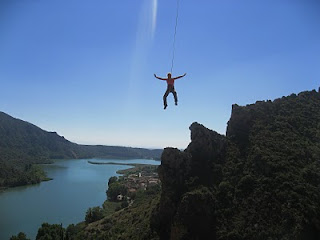 Kate taking the swing at Disblia

After 3 hard weeks route setting and coaching in the UK I was back in Spain. Another days coaching with the guys from The Rope Race in the Costa Blanca and finally my mega work stint was over!! For a change we have decided to take a break and head to our field in Catalunya rather than work on the house. It feels like an age since I have climbed routes but day one was cool, we met Tom and Lynn at Disblia and after a warm up on a 7b+ I managed an 8a os. As the sun came around we headed off for a break, some food and quick-guided tour of Santa Linya from Tom. In the evening we went to a newish sector at St Llorenc finishing off with a 7b and a fantastic 7c. 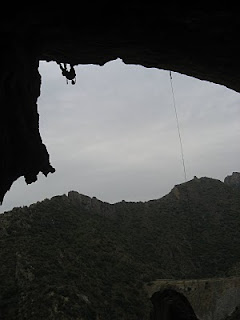 One of three 8's i climbed at Disblia

Day two and clear blue sky (again). Kate headed out on Joe for a ride and I did some field tidying and had coffee. When it came to starting the van though all was not good. After a while trying we called out the breakdown service and by the time we got our friendly breakdown man to the van I tried to start it once more and low and behold it started. It looks like we have a problem with the glow plugs and they need the sun to warm them to start. Late afternoon arrived and we decided to head to Santa Linya. With little time left in the day I just ticked a few short and bouldery routes on the left, 2 7b+’s and a 7c. 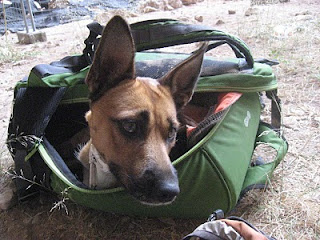 Yesterday evening we had parked the van the right way to catch the morning sun. With today originally being a planned rest day, we decided to put off a garage visit and head to Tres Ponts. The thing about Ponts is that the routes are massive, usually with 16 quicks and between 30 and 50 metres in length, perfect for getting fit. After a couple of easy warm ups it was time for the main events. A classic 7b+ followed by the 7c+ version of El Segre was amazing. My second 8a os of the trip was Mitres Moderns, which apart from a tussle with an undercut and almost doing the box splits was pretty steady. An easy 7c came next which really was a bit soft. Finally it was time to warm down!!! So I chose the amazing and highly recommended Nidra 7c+. This felt like one of the harder routes of the day and was the best fight yet. All 30 metres was a battle to stay on the rock, numerous power screams and some pretty scrappy climbing style allowed me to somehow clip the belay. I lowered off a very happy man and declared to Kate it was time to leave.
Tom and Lyn came to the rescue as we have taken the van to the garage. It turns out that one of the injector pipes is pissing diesel all over the place!!! Two weeks to get a replacement!!! But in true Spanish style they have removed the pipe sent it to Lleida to get a new one hand made and will have it fitted and ready for tomorrow for us to head to Disblia again. I must admit there is something about this Spanish lifestyle I like. 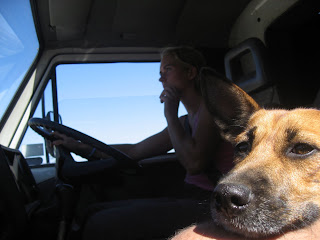 Back on the road.

The rest of the week was spent back at Disblia, Santa Linya and an interesting visit to the slightly off the beaten track Camarassa crag, home to a very stern but cool 7a. The highlight of my week was a redpoint in fantastic Sunshine of the hard 8a+ Asaltibiankis at Linya. A route that would probably get 8b elsewhere.