In my last post I mentioned the next project that I was on with. Well now it is no longer a proj. The fantastic Mala Hierbes 8c is in the bag. After my poorly prepared visit with my 6am start I returned rested. I warmed up on the route. This is not so hard to do as the first 10 metres are 6b, then the 8b section which has a crux at the end then finally the 8c section. This just gives me a chance to recall the moves on the long 45m route, refine some foot movements and get back into the flow of the route.

My first red point went well and I felt strong, I fell two moves from good holds. My next go I felt on fire and the 8b whizzed by feeling easy and flowing well, I clipped the 8b chain and two moves into the extension I found myself sat on the rope! Too many biscuits Mike Langley said. I had broken a small tufa. I pulled back on to find a new method and the I broke a large foothold. Now normally feet on tufa ground tend to be in abundance but this one was the one I clipped from and one that was a almost no-hands rest at the end of the 8b......doh. Again I reworked the moves which now felt a bit harder. After a while I called it a day, I didnt feel I had another go in me with a new sequence and no knee bar rest!! You have to look on the brightside though, its all moves in the bank as they say in the trade. 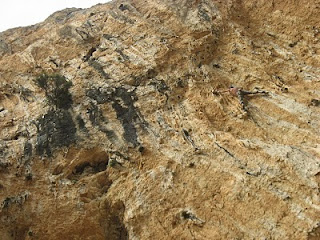 Arriving at the 8b belay and the now defunct kneebar rest.

Another rest day was spent building the kitchen, the house is coming along well now as we have committed ourselves to get it finished by spring rather than dragging it out. We have gone for a more traditional built in Spanish look, an old pot style sink and some pine drawers we found at the maket. All in all we should have it done in the week and all for around 200 euro. 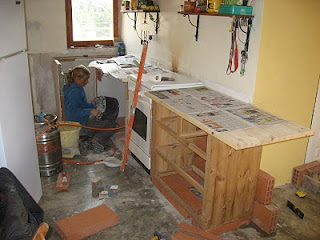 After my kitchen building rest day I was back up at the crag with Kate and Sandi. The weather was perfect and we could sun ourselves in the sun trap. After my usual warm up I reached my high point from the previous session and feeling a little stronger i thought it might be the go, that is until I muffed the foot movements!! A quick rework a snooze in the sun then i set off knowing this would be the go, I blasted up to my high point, go the feet right and a few slaps later found myself in the no-hands by the last clip. I milked it for all it was worth knowing that a fall form the last powerfull moves would be really stupid. In the end I topped out easily to see the sun setting behind the Bernia Ridge. Another quality 8c in the bag and possibly one of the harder ones I have done thanks to the biscuits. 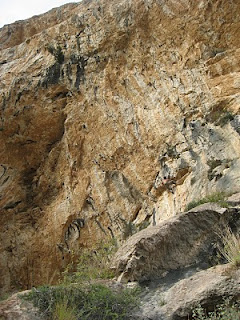 Leaving the 6b warmup section. 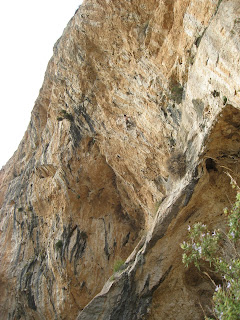 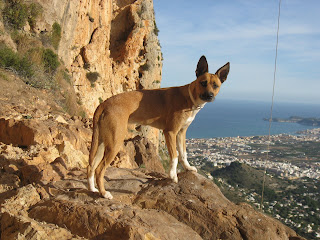 Sandi takes in the view.

As for today in the land of dreams. A clear blue sky, a morning frost, shirt off in the sun, Kitchen building and mucking out the horse, hmmmmmm its not always perfect here.