One day climbing in The Costa Blanca

Sorry I have been slow in getting back to you guys after my post on First and Last and Andreas Profit's amazing 8b solo.

Well first off I did indeed head up to the Bernia Ridge and climb the First and Last. I have got to say hats off to Andreas in soloing the line it is deffo something I would never do and to be honest could i be arsed......no. In my world nowadays I have very little time to fit everything in. With trying to run my business Epic Adventures, route setting in the UK and building my home in Spain I dont really have the time (6 weeks in Andreas's case) to put into a route, let alone a route that is not at my physical limit and is a bolted sport route! If I wanted to solo a hard route I would go and find one that is either a complete solo or a spicy trad route.

At the end of the day we are a funny sport which in the big wide world sometimes seems a little pointless, just like cricket. But like many things in our lives it is a very personal game and we take different things from it at different stages in our existence.

So if thats what floats Andreas's boat then so be it, but if I ever meet him at the crag I hope he will introduce himself so that I can leave. I would rather not see someone break a hold a die while soloing a perfectly safe route, there are plenty of unbolted ones around.

In the past I have done my fair share of spicy routes and solos but to be honest I would rather be able to go climbing again tomorrow, and if I choose to do a spicy one in the future it wont be a bolted one. There is a line to the right of First and Last with no bolts and probably around the same grade maybe it would have been a better solo, although I fear it wouldnt quite have the same wow factor as soloing an 8b sport route.

Anyway back to the route. After having been ill all week and tired from working I found myself getting a little powered out in my left arm so it took me a few goes. In my mind, I have spent ages comparing the grades with other routes in the area. Los Lobos 8a and Matrix 8b in Bovedon. Holds What Holds 8a at Murla. L'Espolon De L'Ocaive (part 1)8b Raindogs 8a at Malham and a million others and my conclusion is that First and Last is more like hard 8a. The crux is basically a boulder problem off the slab, then good holdS to a powerfull move at the top. The best route around here to compare directly to this is Matrix at Bovedon. Almost identical in that the hard moves are at the start of the route (or at least at the start of the main part of the route). The only difference is Matrix is 8b.

I got a mesage from Mark Edawrds after my previous post and he said, A grade is just a grade...but was the route good? That's what's most important in my opinion.

My response was The route was great. Nice day up there today. Lots of sun, a little rain then hail!!!

So if you fancy a nice route in a nice position i will definitely recommend The First and Last.

And just to keep you up to date with Ted. He can now do sit, fetch and paw. With 2 dogs, 4 cats and a horse its hard to decide who is no 1.....next up some chickens I think. 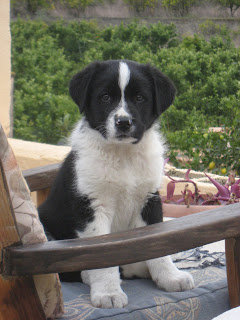 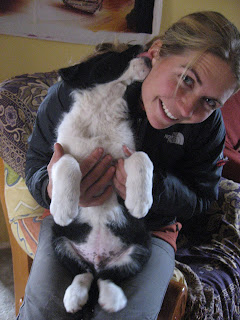