Yet again and yes I hear you say it I am a slack blogger......sorry.

So just as a quick catch up last time I posted I mentioned a new crag up on the Segaria ridge, bolting has finished and the results are L to R 6c+, 7b, 7c with an 8a+ extension and a nice warm up line of 6a. I also managed a trip up to my crag, 45 Degrees. I have had a few days working a line up there, originally bolted by Mike Langley. Although I tend not to work projects that are gonna become long term missions I think this one will be. After 4 days of work I still have 4 moves un done, 3 that constitute the crux and one hard move near the top. The line is a total power endurance feast of around 30 moves, with no rest and some heart breaking big moves to pass the last bolt. Hopefully when I get back on it in September it will be a little cooler and I will be a little stronger. In between beating myself up on the "Barrel" project I polished off another FA on The Sun Terrace. Sunny Side Up has a hard and sustained start past the first three clips into some massive pipe tufas to a pumpy and interesting finish. The lines on this sector are now 7c+, 8a, 7c, 8b, 7b and 6a. 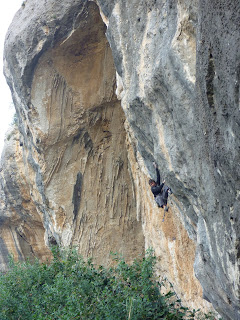 This is the 8b Adios Sol on The Sun Terrace

When I get back to Spain in September the main aim will be to bolt the amazing tufa wall in the background and the amzing arete to the left.

For the last few days I have been staying with Jerry Gore of Alp Base fame, and climbing around the valley of Ailefrode, seeking out the shade. Day 1 we headed to the Vallouise sector Entraygues home to the amazing Tony Lamiche route San Ku Kai 9a. After a quick warm up on a 6c I managed to crimp my way up the bouldery 8a Les Pitchounes followed my another 8a Le Sika Karai De Rika Zarai. Pretty please with my morning on sights we left for another sector as the crowds arrived. We headed up to Grand Bois to catch up with my good friend Pierre Muller who I went to Trango with. Another awesome sector where we finished the day with a couple of ace 7b+'s including the fantastic 35m Diaclase, a must for anyone climbing at this grade.

The next day we headed up to the valley of Ailefroide to check out a newly bolted in the shade sport crag. Currently there is no topo for here so out of the 10 or so routes we only had a grade for two of them. A pumpy warm up on the 30m and 10m overhanging 7c crack Punishman Park was a cool way to start the day. 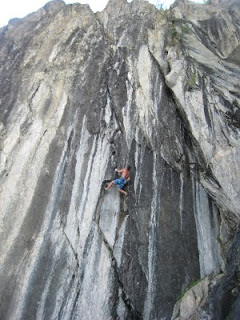 Punishman Park 7c. The left hand version 8b moves out left from the next bolt. Initially via some powerul indercuts on poor feet followed by a set of complex crimp and foot movements. Wow weeeeee. 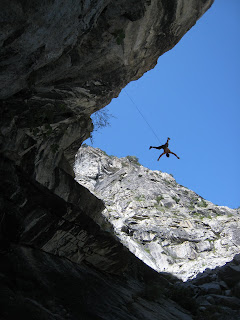 Giles Cornah lowering off into space.

Next up was Punishman Park left hand. A flash attempt finished pretty quickly, I managed to get through the crux but found myself wronghanded and out of sequence...doh. After a bolt to bolt, I sent the route first go at around 8b. I had to dig deep and probably screamed on all but one move!! I felt that this made something like Predator at Malham look like your euro holiday tick or 8a+. Hence the name Punishman Park(to be said in a french accent)

Tomorrow we are off up into the mountains, we are heading up to Sialouze to try a 13 pitch route with 7c+ and 8a pitches. So tomorrow a 4hr walk in and bivi, route on Wednesday and down for tea and chocolate croissants for breakfast on Thursday.

Looking forward to a challenge that is a change from choosing the colour of my next boulder problem. :-)