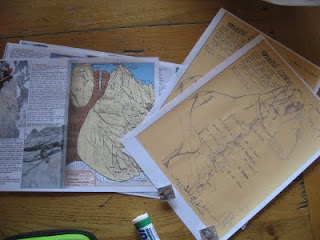 On the 24th of August Giles Cornah, Jerry Gore and myself made the first British ascent of Unchi Maka on the South West Face of Sialouze. The classic line from late 2009 was originally put up by Francis Elichabe, Ben Kempf and Fred Roulx over a period of 3 days, 2 in August and 1 in September and only really became public knowledge when Jean-Michel Cambon published the latest edition of “Oisans Nouveau" in 2011.

The name Unchi Maka comes from the Sioux Indians name for Mother earth and is the perfect partner for Wakantanka, The Great Spirit, on the East Face of Sialoze. Wakantanka was also climbed first by Fred. It was attempted to be freed by Patrick Edlinger but first freed by Jacques Perrier alias Pschitt. Jaques is a long time old local hero who I managed to meet on this trip, famous for the first ascent of Pichnibule in the Verdon which our very own Big Ron went onto free.

Fred also chose the name Unchi Maka in the memory of his mother who passed away in 2009. 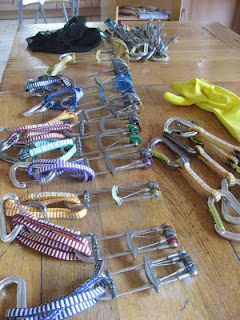 The rubber glove was surplus to our kit requirements!!

The 13 pitch route Unchi Maka is arguably the hardest alpine wall in the Southern French Alps. Graded ABO (abominable!) and with a crux pitch of Fr. 8a. With another 6pitches between 7a and 7c+ the route is over 400m long and finishes at 3576m, right at the top of the Sialouze. The climbing is never impossible but always difficult and challenging with pitches that required both bolts and trad gear. The line took 10hrs to climb from bivi to summit to bivi. 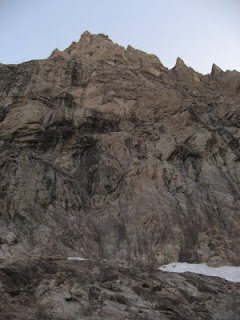 The South West Face of Sialouze. Unchi climbs the black streaks left of the centre.

We climbed all the pitches free, either os or flash except for the 8a where I took 1 fall. A hard pitch! That pitch had only a few weeks ago repelled the amazing Yann Ghesquiers. 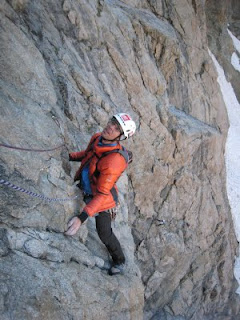 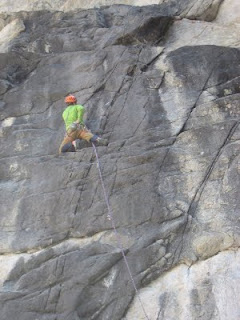 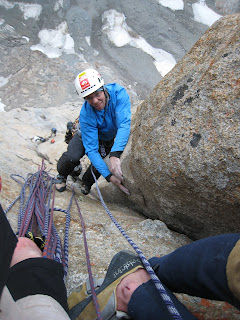 The best pitch was actually Pitch 11 – an horrendous overhanging 7a off-width. 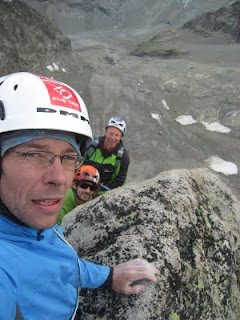 For me this was a another great in-sight into hard climbing in alternative places. The walk in, the bivi, the temperatures and the altitude all lead to the added seriousness and difficulties of climbing something like this free. As for the pitch grades, I thought they were a little softer than those in the valley but with my non existent altitude fitness there were still a challenge, something of which I am looking forward to do more of. All in all though for me the hardest part was..........the bloody walking!!! 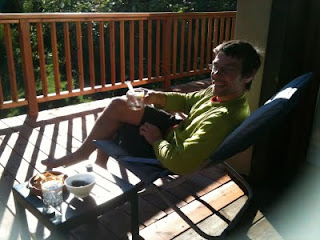 The Gin and Tonic celebration and a big thanks to Jerry from www.alpbase.com for his motivation and entertainment.