Over the last few weeks I have spent a number of days here..... 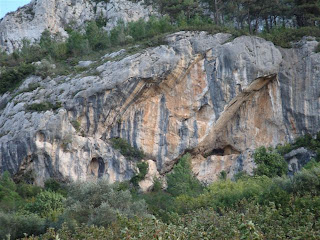 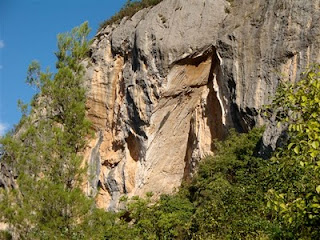 It was way back in March 2010 when I made the first ascent of Luz De Sol 7c, the obvious sun lit white tufa in the pic above. The crag now boasts 23 routes from 6a to 8b some of which have been climbed and some of which are still projects. The current hardest is Adios Sol 8b, climbed in early January this year.

The first round of routes were bolted by Mike Langley and myself in May 2010 and a few weeks ago we returned to continue the job. 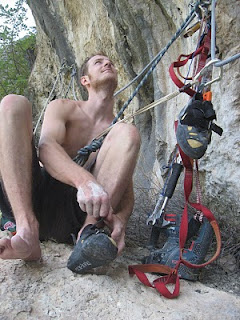 With another 7 routes bolted some of them even got climbed this time. A couple of new 7c's were both class additions, Pared De Rojo 7c, climbs leftwards out of Sunshine to re-join and finish as for that route. The massive 16 bolt journey of Crimp Eastward 7c follows the slightly obvious diagonal line in the top pic and after an epic bolting and cleaning effort from Mike I managed a flashed first ascent. 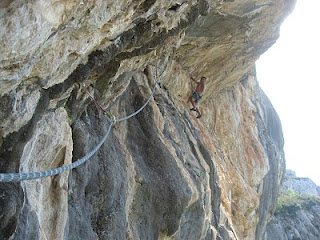 The other massive diagonal line was also soon to follow. Another 14 bolt diagonal epic. This time a stern double boulder problem start made the first half the crux. After a decent rest climbing around 7c leads you to the top.

Over on the right hand side we added a 6c Zen Garden, a intricate and continous 7b+ Say No To Jugs and another 6a to join Dave Simmonites earlier addition of Lentamente Lentamente. Roots Manuva was so named after the massive tree and earth moving effort carried out by our resident beach babe Kornelija Howick. 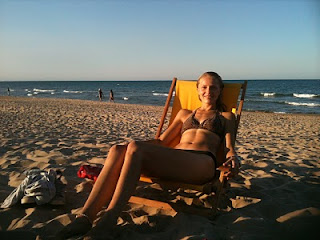 Kornelija looking a bit rough before she applied her mud pack.

The final man with a gun this week was Martin aka Strong Martin. As you can see from his bolting technique he still has a little to learn. We climbed the first half of this line at a pleasant and juggy 6b and I also bolted a right-hand finish that will probably become a classic 8a/+. 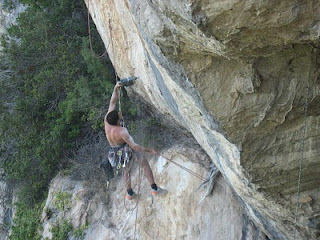 The main aim for my bolting mission though was the "King Line"....possibly one of the better sport lines I have every seen and most definitely the best line in the Costa Blanca. 14 bolts up a stunning arete mark the way. A hard boulder problem start. Some more hard moves to gain the arete and then another 10 bolts worth of pumpy moves to the top interspersed with a few more hard moves......grade? Well who knows? Who cares? I just want to be able to climb this stunning feature. 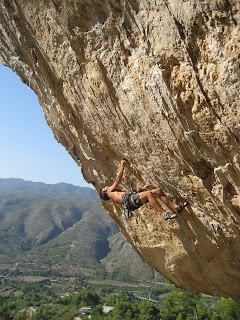 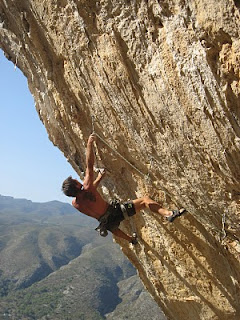 After all that hard work there is only one thing left to do, have a beer a plan for the next visit. 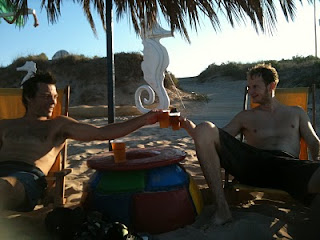 As for the crags location and access you will have to wait a bit longer as there is some unfinished business. Happy climbing. BIG G