You may wonder why I am blogging about Jordan repeating Loaded. The first repeat in 14 years :-o.
Well many moons ago I tried this line and managed to link it on a TR. The conditions on the day were poor and the rock was very harsh on the fingers, I made a vow to return. Sadly I never did, but on hearing the news I wasn't gutted I was totally made up the Jordan had got the tick. Although it did remind me that sometimes we all need to pull our the preverbial finger, stop talking about it, stop training for it and just go and climb it.
Today I headed down to the best bouldering wall in the country BUK, I had a climb with Ian (the man with the biggest shoulders) Vickers and managed to find time to have a chat with Jordan about his ascent. Here is what he had to say.

G. Yesterday was not only a good day for you but also for Naomi. Possibly the best husband and wife grit sending day ever!
J: Yeah Naomi had a great day with a quick repeat of Snap Decision, a fairly stern E7 to the right of Loaded.
G: The 1st female ascent I think, previously it has had a few OS in the early days by Seb and Ian but it has now lost one of the poor pegs.
J: Its a bolder proposition nowadays. She had a look on Friday to give it a brush and then led in first go on Saturady (yesterday)
G: Nice work Nao. How much time has Loaded taken you.
J: I have been on it 4 times. 3 years ago I tried to ground up it with James Ibbotson, we made it as far as the arete but being already totally boxed we failed to get any further. 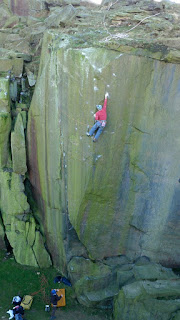 Dave Sutcliffe out on the arete. Photo Kevin Avery

My next visit was with Pete Whit, we were both climbing well and managed all the moves on a top rope but never went back for the lead. There are some sharp crimps on it and the sequence is complex so its hard to do in a day.
On friday I returned, I knew Dave Sutcliffe had been trying it and also Neil Sugden has been very close so I knew the line would be brushed. I manged to do all the moves and re-learn the sequences.
I returned on Saturday warmed up and then climbed up to place the gear and reversed to the ground. On my first real attempt I fell and on the second it went down.
G: How was the lead then?
J: Well the guys watching and belaying said I looked smooth, but inside I felt like I was shaking all over. Its one of those routes with moves that you are never sure you will do until you have and you keep climbing it like that, will I or wont I? After a bit I was near the top thinking, oh no I am gonna have to climb it now.
G: How is that top out?
J: Totally gripping, I hadnt cleaned all the holds and Sootys method was to the left and mine is to the right so I ended up slapping up some green filth with my heart in my mouth. Sitting on the top and after I had finished screaming I was awarded to a round of applause from all the helmet clad climbers in the quarry.
G: So what prep did you and Naomi do for your grit day out?
J: Lots of sport, a week in Majorca DWS and a trip down to the amazing Foxhole on The Gower.
G: So the Yorkshire arete tripple crown is yours, Reservoir Dogs at Widdop, New Statesman and Loaded at Ilkley. Which is the hardest?
J: Loaded, then Reservoir then Statesman. All are amazing though.
G: The grade?
J: Hard E8 7a not enough for E9
G: Good effort to both of you, E8 and E7 yesterday from a husband and wife team, class. Anything else to say?
J: To Sooty and Neil, sorry for getting the repeat guys, you have put in so much time just keep trying. 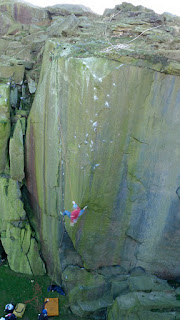 Dace Sutcliffe taking the ride from near the top. Photo Kevin Avery.

Thanks to Naomi and Jordan and a special thanks to Kevin Avery for the pics. You can visit Kevins Climbing Gear Reviews UK site here. It is full of info reviews and his blog. Check it out.