2012 feels old to me but it has already been fantastic. On my last day in Spain (Jan 6th) I managed to flash my first 8b. Traversia De Los Gliadores. This takes the obvious left to right diagonal break line starting up the grey rock in the back of the cave finishing in the top right of the pic. 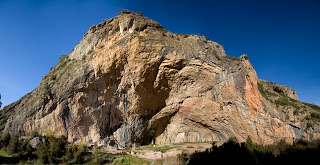 Thanks to Jack Geldard of UKC for the pic

A full 50m of pumpy climbing where it is possible to fall not far from the end. Even with my years as a boulderer it is routes like this that I really love. Once the fitness comes it is a fantastic feeling when you are able to recover in amazing positions. Hanging from a jug in the middle of this cave is one of those places. Going from being boxed out of you mind to ready to go again. I find my self leaving my climbing mind and just chilling, able to take in the surroundings, even have a conversation with people around you and take time to watch others climb. Love it.

With my already hectic year almost one month old I have some great news. Not one but two new sponsors. I have joined the family over at Boreal and after a few years of working with their kids club I have put pen to paper and become The Climbing Academy's first sponsored climber. They join DMM and Beta Climbing Designs for 2012.

So what does all this mean?

Well its great to be involved with Boreal as they are a Spanish company and obviously I like Spain. I can now actually go to the factory and work with them directly to give them feedback and work on prototyping. I call it the Boreal family as it is a family business. Jesus (the boss) is the man that Jerry refers to in his book Revelations. It is family owned and family run, a rare thing nowadays. Its always a better feeling and a better relationship when you are dealing direct with a company and not through a distributor. Thats not to say I didn't have a great time with 5.10 over the years and I certainly wish Big Stone all the best. Its amazing to join the likes of Yuji Hirayama, Danni Andrada and the UK's very own climbing couple Jordan and Naomi Buys.

The real reason I have switched to Boreal though is this.


Yuji Hirayama on Boreal - UKC/UKH at OutDoor 2011 from UKClimbing.com TV on Vimeo.

Zenith, the stickiest rubber from the company that brought sticky rubber to the world of climbing.

My association with The Climbing Academy has been growing ever since they opened and with their recent Glasgow project coming on line we both felt now is a good time to make some stronger links. Having worked with the Youth Squad since 2009 we are now also incorporating regular setting and coaching sessions.

In order to achieve my goals for 2012 TCA's sponsorship will allow me to set a little less when I am in the UK yet still work and earn a crust. I will be working closely with Paul Twomey in Bristol and Al Cassidy (Assistant Manager in Glasgow) to develop a training resource that hopefully will help all their customers to achieve their own goals.

WOW I am really looking forward to visiting TCA Glasgow it looks amazing.

I will be around at both centres from time to time to offer 1:1's or small group private coaching sessions and on a few occasions I will just be wandering around offering advice to anyone who might want some and even if you don't want it you will probably still get it. TCA will use their newsletter and blogs to keep peeps up to date with my progress through the season and to let you know more about the training resource as it develops.

But, the real reason I have signed a deal with TCA is so that I can partake in their fantastic Cappucinos. Try them as a double....rocket fuel!!!

I will be hanging out with TCA on the following dates:

You can also see where The UK Boreal boot demo tour will be stopping at here.