Well it really has been ages since I last blogged. So here is a whistle stop tour of all that has happened in between route setting and coaching.

Towards the end of June I began to explore Anston stones. This was great fun as for me it was somewhere totally new and is was crimpy limestone, a style I had not really climbed on for years. Initially it was pretty intense put after a few sessions my fingers were getting back into the crimping game. My trips here culminated in climbing the cool Black Crow 7c+ and on my last visit there I flashed Quarantine, given 8a but on what grading scale I dont know. Grades here are pretty varied, in the 7a/+ region they seem soft and in the 7c region seem hard, but that is just grades I suppose like everywhere else. Quality venue though and good effort to Mick Adams and Lee Robinson for producing the guide. I am looking forward to the colder temps for the harder boulders here.

July began with more work but now I was managing to squeeze in some rest days and some sessions at The Works getting spanked by Ned, Chris Webb and Alex. I wasnt training for the BBC but I was aiming to up my game a little. Sadly Cliffhanger was rained off but the BBC went ahead. I managed to scrape into the final in 8th place and with only one way to go I finished in 5th. To be honest I was totally made up wih this and am sure with some effort I will be back on the podium next year. Awesome to see Barrans take this year and the Shauna v's Alex battle was fantastic.

After a week setting for the Reach and the amazing new Beacon Climbing Wall, I did my first mega drive of the last few weeks out to Freidrichshafen to catch up with my sponsors, DMM, Boreal and Sterling. I was also there with two other hats on, firstly I was a stand in Dave Simmonite (climb magazine editor) though not as wide, and had to call on a few brands for him. Secondly I was there to talk Blocfest. Blocfest is a new series of comps with a festival feeling to be held in the South kicking off in October they will run over the winter to Febuary. Check out www.blocfest.co.uk for more info.

Next up was Magic Wood, a quick hit trip and althought completely destroyed from a hard week and loads of driving I managed a couple of 7c+'s. From Darkness to Sunshine was great and the new (dont know the name) 7c+ on the Bruno Bloc was mega. 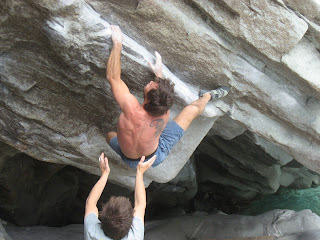 With only 4 days in the Wood it was time to leave......more driving to the Costa Blanca. Time to bring Joe and Oliana (and her unborn foal) back to the UK.

A quick stop in the Ariege allowed me to tick the super hard Reine De Sabart and a hot day on the blocs in font landed me back in the UK for a 10 day coaching and setting stint!!

Today is my rest and packing day. Tonight I am off to Stuttgart to climb at the Adidas Rockstars event. After that it is off to the Alps!