A little bit of luck

I always say that a little bit of luck goes a long way in all sports. Watching the Grand Prix from Canada yesterday I guess Hamilton feels a little unlucky to sustain some car damage that put him out so close to the end of the race and when he was going so well. Back in the day when I was competing Andy Earl and Mark Croxall always use the phrase "The Luck Of The Parry" when I pulled a climb out of the bag.
Does luck really exist or do you make your luck as Matthew Syed talks about in his inspirational book Bounce, The Myth Of Talent and The Power Of Practice. 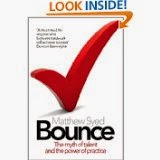 This book I would highly recommend reading. Quality practice and repetition is the key I believe. The best climbers in the world aren't just that because they were born that way, they work hard at it. Ste Mac, Dave Macloed, Sharma, Ondra and Shauna Coxsey are all good because the train hard and try hard.

So what set me off today with this amble? I just came across an interview with Jon Chittenden that was filmed a while ago by the guys from Boulder Central, West Bromwich. I talk about many things including the highlights of one of my best years in terms of performances, 2007. I climbed 8B fast, in fact I was doing two a day sometimes and I became an Arco Rockmaster. With Nalle and Jacky in Arco 2007. Photo Credit Alex Messanger 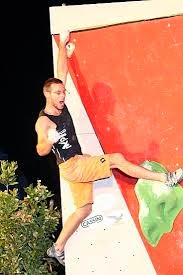 This didn't come down to genes it basically came down to living literally in a climbing wall, Boulder UK Eating sleeping and breathing climbing with NO external influences and training hard. I won in Arco by one move over my good friend Nalle Hukkataival, a bit of luck you might say or was it that I chose to go wrong handed to get the higher hold :-), as we all know climbing is not just a sport for the biceps but sometimes the brain comes in handy too.

Shauna Coxsey now moves into a challenging and exciting two weeks, with the last two rounds of the Boulder World Cup to go in China and France. With all the hard work done all Shauna needs to do is keep smiling and enjoy the next few events. Hopefully some luck will shine.
Labels: 8B Arco Boulder Central Boulder World Cup BoulderUK Climbing Shauna Coxsey