Things have all moved around yet again. But change is good. I have just watched Adams movie Change, inspirational to say the least. Its what I need at the moment, inspiration and commitment.

We have returned to our home in the Costa Blanca after almost 3 years away and to a project and a line that has been burning away deep inside me all this time. 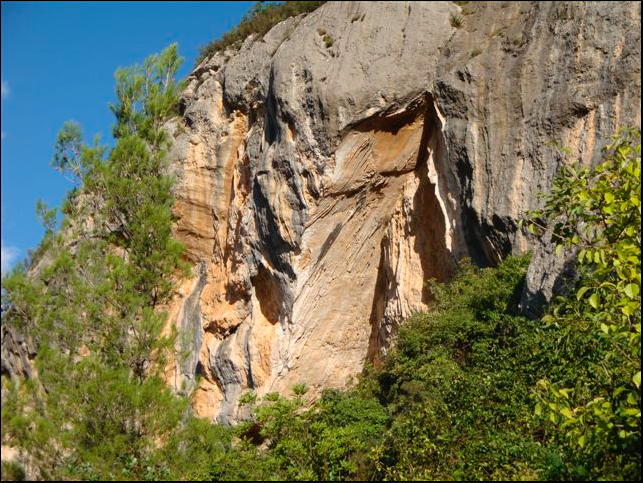 In 2009 my friend Bill Hannah spotted a wall, it was pretty obvious it was going to be a great place to climb. High above a beautiful valley is Sector 45 Degrees, I think it is pretty obvious why its called that. After creating a way in over numerous visits with Bill and Kate I could finally get stuck into the bolting in May 2010.

The first route I bolted and climbed is called Luz De Sol. A stunning single white tufa that went at 7c, a classic all the way to the top from the aptly named Sun Terrace. It quickly became obvious I would need some help bolting if I was to even think about realising the crags potential so I enlisted Mike Langley from The Castle Climbing Centre, Martin Strong and Korneilja Howick. They spent there whole holiday here bolting, bolting, bolting, cleaning, cleaning, cleaning and generally getting wasted in the midday sun to help open the routes.

Since those days we have created around 27 lines from 6a to 8b and 13 of which are still projects from around 8a to 9a including the daddy of them all the stunning arete on the edge of the 45 degree wall. I have probably invested around 20 days of my life into this route already and its about time I got it done. In the past I have always only had the odd day on it, never really putting in the effort to start making progress. Just over a year ago I managed to unlock a new sequence to pass the first bolt and since then I have known it was possible. Since returning a few weeks ago I realised I was a little fitter than before after a month in Kalymnos and I decided that I need to start putting the time in. 5 days of effort has seen some great progress I finally managed to climb from the ground via two hard boulder problems to the arete where the route really starts. I think this section is around 8b. From here you launch straight into the crux followed by an ok shake with a heel and what will probably be the red point crux I think. A better shake out albeit on side pulls is had then from here on in it is around 7b+ to the top. 14 Bolts in all.

Finally I have decided to commit to getting this done, some training the last two weeks fitted in around a busy diary of setting and Blokfest have made me feel a little stronger and a little bit more care with my diet and some work on a bike has allowed me to drop a few pounds. Two days ago I had my best red point yet. An earlier start out to the crag I was hoping for a few red points, the first went well and I almost made it through the 3rd crux and into the shake with the heel, my best attempt yet.  Only to power out probably more due to the cold wind than anything else. I rested for a while the pulled back on. The first move is a massive and contorted cross over like this....

....but when I brought my right foot up I felt a massive twinge in my hip/back. I really struggled to reverse this as you can't actually fall off here without going splat, i couldn't really walk or move and ended up laying down on the floor with Kate pulling off my boots and  putting my shoes on. End of the game...for now.

Hopefully tomorrow I can climb, there is a harder method than the roll over that isn't as tough on the back but with harder moves, I guess I will have to try it. Cant wait though, I love trying this route, the process is and has been amazing, from bolting to unlocking the moves. Many of which I couldn't  do when I first tried it. Every time I discover something new, something more that brings me closer and closer to the finish it is a great feeling. The only way to stay motivated is it take all the positives and learn from any negatives. Little by little, Poco a Poco.

Where ever you are and whoever you are I hope your dreams will come true next year and you all have a great time over the last few days of 2014. I will be saving my celebrations for sometime in the future.
Labels: 8c Bolting Costa Blanca Costa Blanca Climbing Holidays New routes Costa Blanca Spain