Road trips are the best, smashing across Europe with no real plan just a head full of ideas and friends to hook up with along the way.

After a great weeks coaching in the paradise that is Fontainebleau I picked up Clive (The Castle Tech Gimp), ready for his climbing baptism by fire. The aim was to head down to the south of France and catch up with James Pearson and Caroline Ciavaldini who after a wet trip to Chamonix were heading home.

To break up the ride I hit up UKC for a half way crag stop. Now Remigny is not the dream venue but certainly a place to break up the journey. With 5's to 8a and a one minute walk in there is something for most. Reggae Night at 7b+ is the route of the crag, great climbing on interesting pockets lead to a cheeky finish. We were battling with the weather here and only had the overhanging routes to play on but some of the easier angled 6b's looked great.
By the evening we were happily located on the sofas of James and Caro full to the brim on French national dish, the ubiquitous pizza.

James Pearson relaxing in his loft.

Day 1 down south was great we headed to St Leger to meet some of the French National Youth Team on a outdoor training weekend. It has been a long time but catching up with some of the great French legends from yesteryear was fun. People that I competed with over 20 yeras ago. The list Francois Legrand, Francois Petit, Stefanie Bodet, Pail Dewilde, Daniel Dulac, Caroline Ciavaldini basically read like a who's who of French Competition Climbing History. The number of World title holders in that room was insane. How cool is that! We chatted for a while, watched an 11 year old Reunion Island girl following in Carolines footsteps and smash an 8a+ first go. She has already bouldered 8B!!

We headed off to seek peace and basically not get burned off. Entrechaux was the location, routes from 6b to 8c. 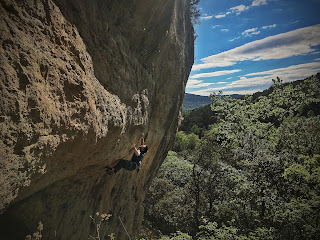 For a warm down with nipped to a 2000 year old Roman Quarry for a little warm. La-Carriere-Du-Maupas is one of those super special venues. 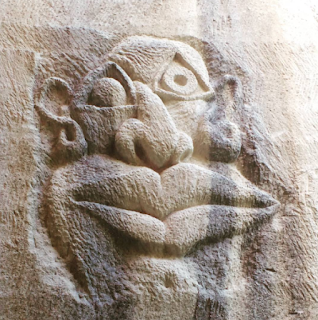 Super cool climbing on the chips the quarryman's tools made all those years ago. 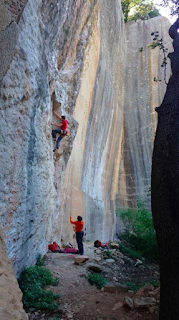 Clive on the warm up/warm down 7a.

Last year I climbed at La Balleine, the upper sector of St Leger. I was super impressed and psyched to go back. Sadly it was too wet this time after the recent rain so the next day we headed into the main valley. Normally here you would be spoilt for choice but with a lot of seepage we had to make do. Looking forward to a drier visit 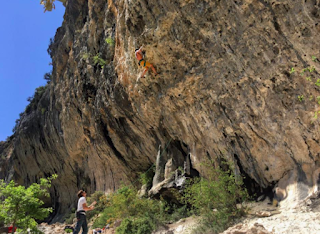 Next up was a rematch with the hardest 7b in the world and the worst/best crag going. Gargantua is James's local training venue. A smooth and very deep cave with almost no natural holds. To say that climbing here is somewhat basic is a little understated. You don't have much choice when it comes to which drilled pockets to use and therefore some routes are a little finger size dependant. So I am basically already on the loosing side here. 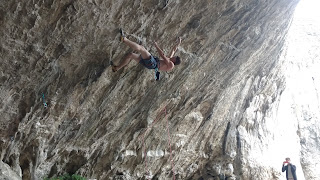 James throwing a lap on an 8c, to the right you can see a pink rope in the belay of the shortest and hardest 7b imho in the universe. 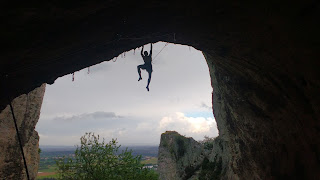 My final destinations in the region were the super old and super classic crags of Seynes and Russan. Seynes was my rest-day but Clive got some easy mileage in whilst being fried in the sun due to a relaxed start. Remember it is always a good time to test out your Italian hitch technique when you forget the belay device!! 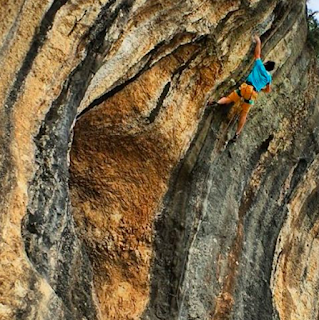 Thanks to Clive, James, Caro and village friends for a great week, banter, food, sauna and generally being nice people. Time to move on...Part 2 next week.

Your style is very unique in comparison to other folks I've read stuff from. Thank you for posting when you have the opportunity, Guess I'll just book mark this web site. paypal login
6 May 2018 at 00:11